Thalassemia may not sound like a familiar disease but according to the World Health Organization, four million Indians are affected by the disease, and over 10,000-15,000 children in India are born with thalassemia every year. Thalassemia is a blood disorder where the body does not make enough hemoglobin. And when there is low hemoglobin, the red blood cells do not function properly.

Thalassemia is a genetic disorder. And as you probably know, genes decide many things about us, like how we look, our hair colour and much more. In the same way, genes are also responsible for the passing on of many diseases/disorders from one generation to another. In thalassemia, the HBB, HBA1, and HBA2 genes are involved. Mutations in these genes result in blood disorders like thalassemia and sickle cell anemia.

An individual with two copies of the mutated gene, one from the mother and one from the father, is affected with thalassemia. Those who have only one copy of the mutated gene is a carrier. In most cases, carriers do not even realize that they are so until they have a child that is diagnosed with thalassemia. Such couples, who already have a child with thalassemia and are now thinking about expanding their family with another biological child, can seek the option of preimplantation genetic testing (PGT) and in vitro fertilization (IVF) to have a healthy, unaffected child.

In the past, if a couple had a thalassemia-affected child from the first pregnancy and if they conceived a second time, screening of the amniotic fluid was done around 9-11 weeks to identify if the growing foetus was affected or not. If the child is affected, parents are given the choice to medically terminate the pregnancy. A decision like this can result in immense mental trauma for the couple.

Today, with vast medical advancement, preimplantation genetic testing (PGT) is a couple’s best hope to have an unaffected child. The couple can approach a fertility specialist and subsequently, IVF is suggested. The embryos of the couple are made in vitro (in the lab) and at a certain stage of cell growth (before implantation into the uterus), the embryos are screened and unaffected embryos are identified. These healthy embryos are then implanted, resulting in the birth of a healthy, unaffected child.

In the last few years, science has progressed even further than just PGT. Today, HLA matching is also performed between these embryos and the thalassemia-affected sibling. If there is a match in the HLA, the bone marrow of the normal baby can be transplanted to the affected child. This procedure could save the life of the affected child as the normal baby’s stem cells (present in the bone marrow) can result in the production of red blood cells and hemoglobin in their older sibling. Such a concept is called ‘Saviour Sibling’.

You may wonder about the legality and ethicality of preimplantation genetic testing and HLA matching to ensure a healthy child, especially in a country like India. While PGT is legal in India, to prevent the unethical practice of PGT, it can only be used to detect genetic disorders in embryo-like cystic fibrosis, thalassemia, sickle cell anemia, phenylketonuria, and among others.

Awareness helps people understand the different options available and helps them make the right choice for themselves and their families. Good Reasons to get IVF done in summer! 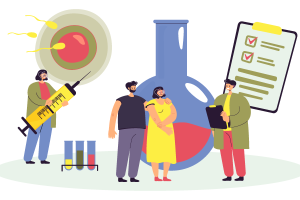 What is a Fertility Evaluation and how is it done?