Pre-implantation genetic diagnosis (PGD) is a reproductive technology used with an IVF cycle. PGD can be used for diagnosis of a genetic disease in early embryos prior to implantation and pregnancy. In addition, this technology can be utilized in the field of assisted reproduction for aneuploidy screening and diagnosis of unbalanced inheritance of chromosome abnormalities, such as translocations or inversions. 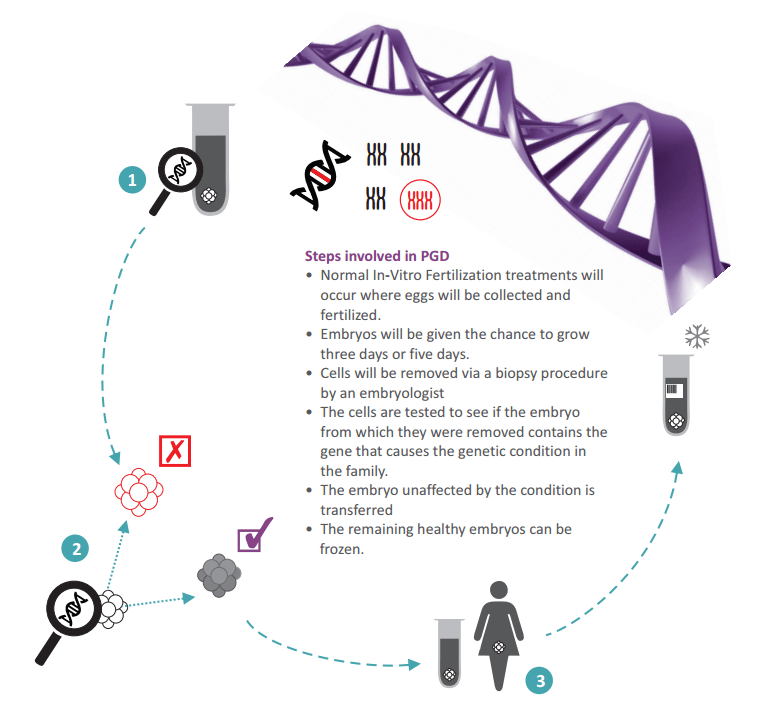 Many couples have benefitted from the use of PGD. PGD may be helpful for you if you have following indications:

There are many possible causes for miscarriage. About 50% of first trimester miscarriages are due to a chromosome abnormality. This may be related to a woman’s age or a rearrangement in a parent’s chromosomes that pre-disposes the couple to conceive pregnancies with chromosome abnormalities. PGD can be performed for either of these possibilities. For women over 35, the greatest risk may be for aneuploidy, a pregnancy with the wrong number of chromosomes, such as Down syndrome. PGD for aneuploidy screening may offer these women a greater chance of a successful and healthy pregnancy. If a parent has a balanced structural chromosome re-arrangement, such as a translocation, a different type of PGD is available.

A prior pregnancy with a chromosome abnormality

The risk for a pregnancy with aneuploidy (too many or too few chromosomes, such as Down syndrome) increases with maternal age. Following a chromosomally abnormal pregnancy, the risk for a similar problem to occur again in any subsequent pregnancy is elevated regardless of maternal age. For some couples at an elevated risk, it may be difficult to consider conceiving a future pregnancy. PGD for aneuploidy can reduce the likelihood of a chromosome abnormality in a future pregnancy and increases the chance of achieving an ongoing successful pregnancy.

IVF frequently enables couples with infertility to achieve successful pregnancies. Some couples, even after numerous IVF attempts, are unable to become pregnant. Some cases of IVF failure are due to the transfer of embryos with chromosome abnormalities. PGD for aneuploidy can reduce the likelihood of a chromosome abnormality in a future pregnancy and increases the chance of achieving an ongoing successful pregnancy.

A member of a couple may carry a balanced translocation (exchange of chromosome material between two or more chromosomes), a Robertsonian translocation (the joining of two chromosomes) or other structural re-arrangements. This increases the risk for a pregnancy with an unbalanced chromosome complement, which can cause birth defects, mental retardation, and/or miscarriage. PGD for structural chromosome rearrangements allows couples to decrease these risks and to increase the chance of a healthy ongoing pregnancy.

Have an autosomal dominant genetic disease such as Marfan syndrome

A person who has an autosomal dominant genetic condition has a 50% chance of having a pregnancy with the same condition. Prenatal diagnosis by amniocentesis or chorionic villus sampling often allows diagnosis of the genetic disease during pregnancy. However, many couples do not want to be faced with making a decision regarding the outcome of their pregnancy. PGD is available for many autosomal dominant genetic disorders.

Carrying a recessive genetic disease such as cystic fibrosis